While the Sahara is the largest desert in the world and covers a surface area of about 3.5 million square miles. The Namib has the highest dunes on Earth and it’s considered the oldest desert, having endured arid or semi-arid conditions for at least 80 million years. The Kalahari is a geological wonder that covers three countries and worth a visit on your next Southern African trip!

The Kalahari Desert was formed over 60 million years ago. Previously, the desert area was actually a shallow basin. What followed is unknown, but there is a common theory that the Okavango, the Kwando and Zambezi rivers all flowed through one single channel across the Kalahari. Seismic movements caused a ‘super lake’ which later dried out, leaving behind salt deposits which form a part of the desert we know today.

Beneath the Kalahari’s great blanket of red sands, hides a treasure trove of iron, manganese and other precious ores. Although the mechanized giants of the open-cast mining industry have gouged gaping wounds on the desert floor, they have only dented the surface of its enormous wealth.

Where is the Kalahari Desert located

The Kalahari Desert is located in Southern Africa, covering virtually all of Botswana, the eastern third of Namibia and the northernmost part of the Northern Cape Province in South Africa.

How to get to Kalahari Desert

Depending on which country you are traveling from, the Kalahari desert is reachable by car. You can drive alone or sign up for a tour.

Planning a visit? Here are some interesting facts about the Kalahari Desert. 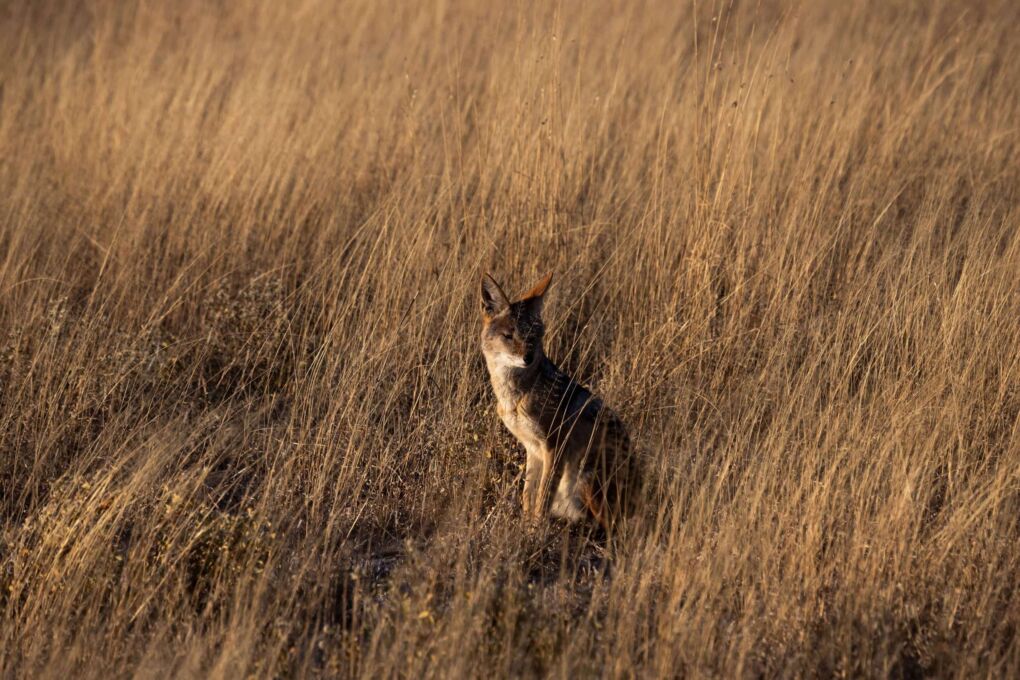 What does Kalahari mean

Kalahari is derived from the Tswana word Kgala, meaning “the great thirst”, or Kgalagadi, meaning “a waterless place”; the Kalahari has vast areas covered by red sand without any permanent surface water.

The homeland of the Bushmen

The Kalahari is the ancestral land of the Bushmen or San peoples. They are thought to have been the first human inhabitants of Southern Africa; there is evidence that they have been living there continuously as nomadic hunter-gatherers for over twenty thousand years.

The desert was the setting for the movie The Gods Must Be Crazy, which featured a Bushman family.

Kalahari is not a real desert

Traditionally, an area was classed as desert if it received less than 10 inches (250 millimeters) of rain annually, but the Kalahari gets between 5-10 inches every year. The Kalahari’s sand is better than most deserts at retaining water and therefore allows for more plant life than most deserts.

The region is rich in coal, copper, diamonds, nickel, and uranium deposits in the region. One of the largest diamond mines in the world is located at Orapa in the Makgadikgadi, in the northeastern Kalahari. Pomfret, on the edge of the desert, has asbestos in the subsoil and a shuttered asbestos mine.

Game Reserves in the Kalahari Desert

Central Kalahari Game Reserve covers a large section of central Botswana and was originally set aside in 1961 as a homeland for the Bushmen. It’s 10% of Botswana’s total land area, making it the second-largest game reserve in the world after Kruger National Park. Four fossil rivers twist and turn through the arid reserve. Among them is Deception Valley, a dusty old watercourse that wound its way through the northern Kalahari sixteen thousand years ago and is today a well-known game watching area.

A variety of grasses, acacia, thorn trees, and other tough, drought-resistant plants cover most of CKGR. Among the shallow valleys, tsamma melons and gemsbok cucumbers are found, which provide the main source of water for the animals and Bushmen during the dry season.

Kgalagadi Transfrontier Park is one of the best national parks in South Africa. Kgalagadi means “place of thirst.” and it’s located in the southern Kalahari Desert, straddling the border between South Africa and Botswana. The terrain covers 15,000 square miles and consists of red sand dunes, sparse vegetation, occasional trees, and the dry riverbeds of the Nossob and Auob Rivers.

The rivers are said to flow only about once per century. They may flow briefly after large thunderstorms, a cause for celebration among the wildlife who flock to the river beds to drink. However, water flows underground and provides life for grass and camelthorn trees growing in the river beds.

Known as Africa’s first peace park, Kgalagadi Transfrontier Park comprises of two adjoining national parks Kalahari Gemsbok National Park in South Africa and Gemsbok National Park in Botswana which were merged in May 2000 after an agreement was signed to allow tourists to move freely across the international border within the boundaries of the park.

The Khutse Game Reserve is the southern extension of the Kalahari Game Reserve, was established to conserve the pans of the Central Kalahari. The reserve’s grass and shrublands attract herds of antelope, and these, in turn, attract the attention of endangered predators such as the cheetah and wild dog. After a good rainfall, as many as 150 species of birds may be spotted around the pans.

Why is the Kalahari Desert sand red

The redness of sand is determined by the level of Iron Oxide throughout the sand. Basically, it’s very comparable to rust. High levels of Iron Oxide are indicated by a red hue. While there are other minor factors at work too, iron oxide is the main cause of the color.

There are 36 to 42 species of wild cats on the planet, of these species, only seven are considered “Big Cats”. Africa is home to three of these seven species of “Big Cats”, namely the cheetah, leopard, and lion, and the Kalahari Desert is home to all three.

Due to the region’s dry conditions, there’s an element of predictability in their movements as animals will tend to either gather at watering holes or hide under big trees for shade so this is a great location for game viewing opportunities. The Kalahari is also home to some of Africa’s rarely seen smaller cats like the caracal, African wild cat, and black-footed cat.

Is the Kalahari Desert hot or cold

The best time to visit the Kalahari Desert depends on your own preference. If you can handle soaring temperatures (think 30 – 40 degrees celsius during the day), then it might be wise to plan your trip for the winter months. Winter in the Southern Hemisphere is between June and August.

In winter the desert has a dry, cold climate where the temperature can reach 0 degrees celsius. The best time to visit the Kalahari Desert for game viewing is in the early summer.

Animals in the Kalahari Desert

The bulk of the vegetation in the Kalahari Desert. consists of grasses and shrubs. The most prevalent ones are acacia trees like the camelthorn tree and some cactus species like the Hoodia cactus are also present.

Travel Insurance for the Kalahari Desert

Use travel insurance while visiting Southern Africa so you are covered for theft and medical expenses. There are a lot of adventurous activities to do in SA, and it’s best to have peace of mind while driving, hiking and trying some of the best food in the world.

3 thoughts on “Guide to visiting the Kalahari Desert”