The landmarks of Egypt are some of the most significant landmarks on the planet! One of the most important facts about Egypt is that Egypt one of the oldest countries in the world but it has been a unified region for over 5,000 years and there is evidence of settlement prior to that.

By 3100 Before the Common Era (BCE), Egypt was controlled by a ruler named Mena and he began the cycle of rule by Egypt’s various pharaohs.

The last of Egypt’s pharaohs was dethroned during a Persian invasion of the country in 525 BCE before it was conquered by Alexander the Great. In 642 CE, Arab forces invaded and took control of the area and began to introduce the Arabic language, which still exists in Egypt today.

Egypt’s landmarks showcase the ingenious, impressive, and mysterious works of the Ancient Egyptians From soaring pyramids through to intricate hieroglyphics and complex underground systems and temples, here are the best landmarks in Egypt.

The Great Sphinx of Giza 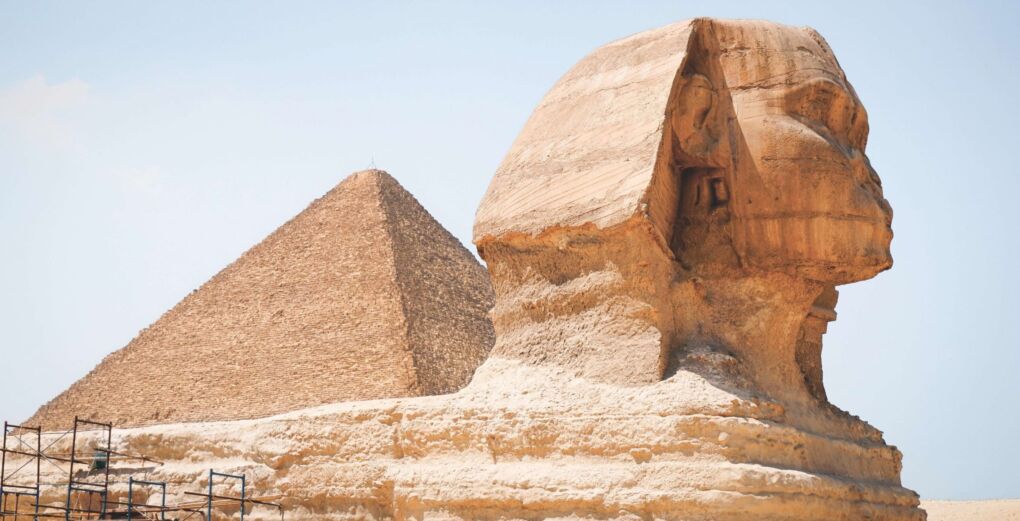 The Great Sphinx of Giza is one of the most recognized landmarks of Egypt. It consists of the body of a lion, the head of a woman, and the wings of a bird. At 240 feet (73 meters) long and 66 feet (20 meters) high, the Sphinx holds the distinction as the largest monolith statue on the planet.

The Great Pyramid of Giza

The Great Pyramid of Giza is a defining landmark of Egypt and the oldest ancient Seven Wonders of the World, and the only one to remain largely intact. It was built over a twenty-year period during the reign of King Khufu (2589-2566 BCE, also known as Cheops) of the 4th Dynasty.

The Pyramid was the tallest structure made by human hands in the world; a record it held for over 3,000 years until the Eiffel Tower was completed in Paris, France in 1889 CE. Pyramids were constructed during Egypt’s, the Old Kingdom, which is when Pharaohs were thought to be Gods, and large tombs were built for their afterlives. This specific pyramid was constructed as a tomb for King Khufu. 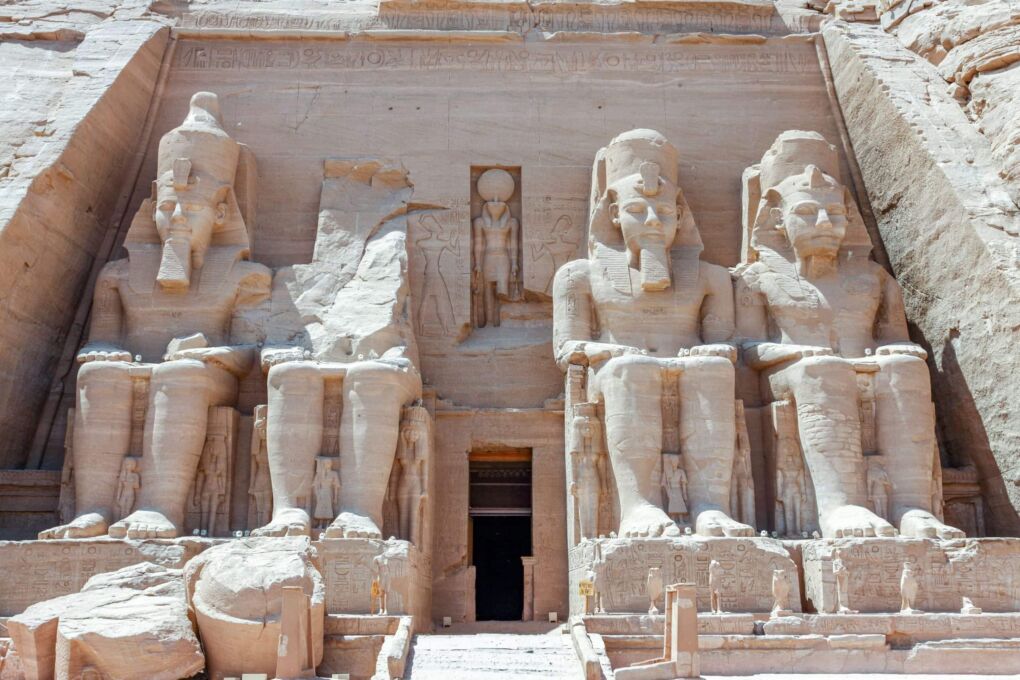 The Abu Simbel are two massive rock temples at Abu Simbel, a village in Aswan Governorate, Upper Egypt, near the border with Sudan. The twin temples were originally carved out of the mountainside in the 13th century BC, during the 19th dynasty reign of the Pharaoh Ramesses II. They serve as a lasting monument to the king and his queen Nefertari and commemorate his victory at the Battle of Kadesh. 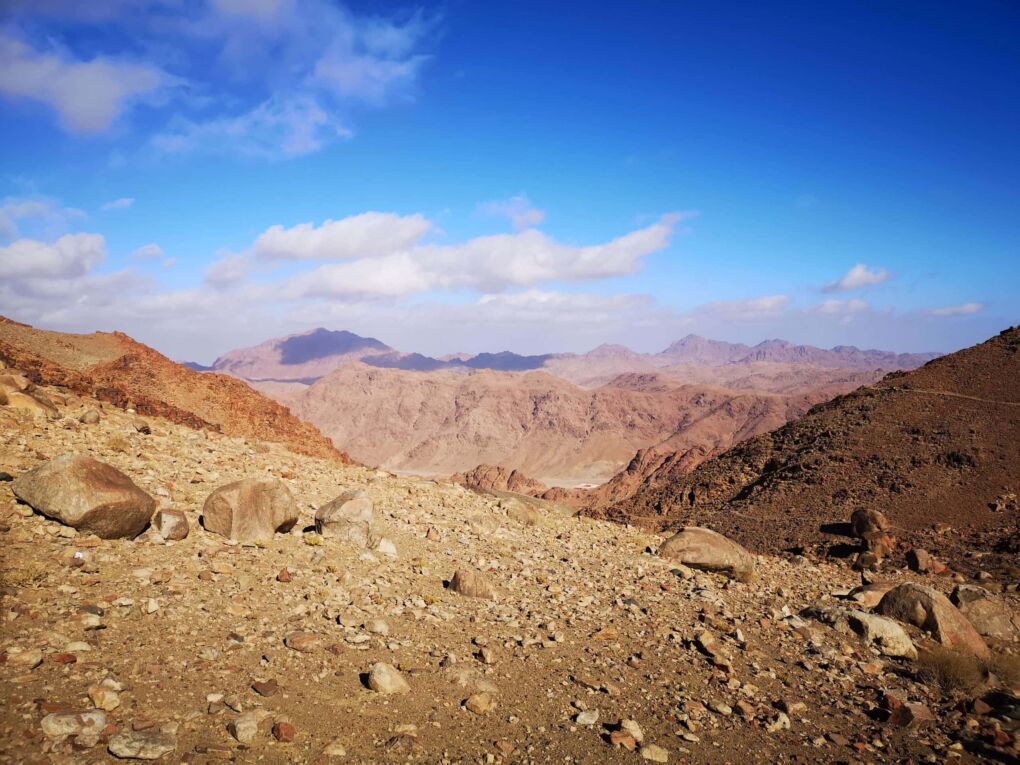 Mt. Sinai is a mountain in the Sinai Peninsula of Egypt, it’s known as the possible location of which the Ten Commandments were given to Moses by God, and is one of the most significant of the Stations of the Exodus.

The mountain is also known as Jabal Musa, Mount Sinai is mentioned many times in the Book of Exodus and other books of the Bible, and the Quran. Mt Sinai is one of the natural landmarks of Egypt and but one of the best hiking spots in Egypt.

Officially known as the “Sacred Monastery of the God-Trodden Mount Sinai”, Saint Catherine’s Monastery is an Eastern Orthodox monastery located on the Sinai Peninsula, at the mouth of a gorge at the foot of Mount Sinai, near the town of Saint Catherine, Egypt. The monastery is named after Catherine of Alexandria and it’s one of the oldest monasteries in the World.

Not only is this a UNESCO World Heritage site but this landmark of Egypt holds the biblical Burning Bush from which God had spoken to Moses – the most sacred bush in the World. This is also believed to be the site where Moses met his future wife Zipporah for the first time. 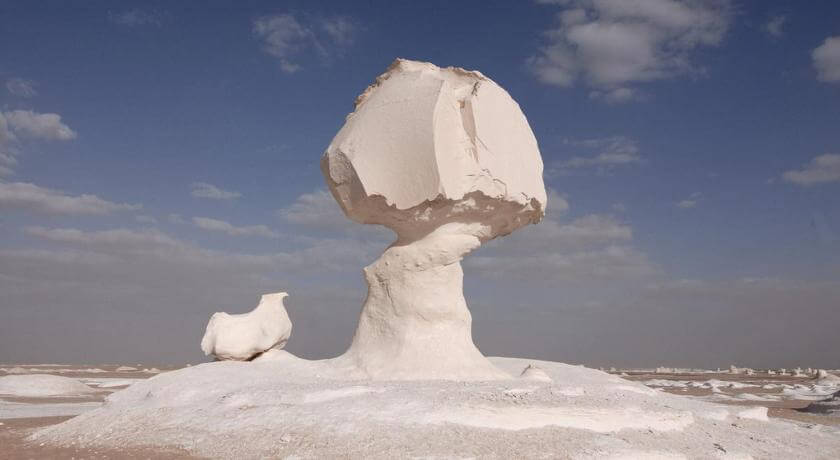 First established as a protected area in 2002 White Desert National Park is a national park and one of the must-see landmarks in Egypt. The park is the site of large white chalk rock formations, created through erosion by wind and sand.

The quantity of unearthly and beautiful wind-carved rock formations shaped in the form of giant mushrooms or pebbles is unequaled to any desert in the world. The best time to visit White desert National Park is at sunrise or sunset. This is when the sun lights them with orangey-pink hues, or under a full moon, which gives the landscape a ghostly Arctic appearance.

Egyptian Museum formally known as The Museum of Egyptian Antiquities is home to an extensive collection of ancient Egyptian antiquities. With over 100,000 ancient objects inside its walls, visitors can see artifacts, coffins, mummies, stones, ancient belongings, and even food types that used to be buried with the kings before death to use in the afterlife.

Valley of the Kings

Founded and named after Alexander the Great, the Egyptian city of Alexandria was home to one of the largest and most significant libraries of the ancient world with over 600 000 parchment scrolls. The Great Library of Alexandria was part of a larger research institution called the Mouseion, which was dedicated to the Muses, the nine goddesses of the arts.

It’s believed the library perished after a fire. The prime suspect in the destruction of the Library of Alexandria is Julius Caesar but to date, it remains one of the mysteries of Ancient Egypt.

In 2002, The Bibliotheca Alexandrina – a modern architecture was opened in an attempt to rekindle the brilliance of the original center of learning and culture.

The Karnak Temple complex contains a mix of chapels, pylons, decayed temples, and other buildings. It is believed to be the second-largest ancient religious site in the world.

Use travel insurance while visiting Egypt so you are covered for theft and medical expenses. There are a lot of adventurous activities to do in Egypt, and it’s best to have peace of mind while driving, hiking, and trying some of the best food in the world.

2 thoughts on “10 Incredible Landmarks of Egypt”