The country has a population of 146.8 million people, 80% of whom reside in Western Russia and two-thirds of whom live in cities. The city of Moscow alone has twelve million citizens, and it’s the largest city in Europe.

Russia is diverse and has a rich palette of natural areas, from the steppes to the tundra. Russia is home to Europe’s longest river, the Volga, and its largest lake, Ladoga. The highest mountain in Europe – Elbrus is also situated in Russia, as well as the world’s deepest lake, Baikal, and the country recorded the world’s lowest temperature outside the North and South poles.

Russia is bordered by two oceans. Therefore, being able to travel by car, one can drive from ocean to ocean. (From the Arctic to the Pacific Ocean).

After spending a week in Russia, here is a list of things I believe you should know before visiting Russia for the first time:

Russia is the largest country in the world and constitutes one-seventh of the world’s landmass and spans eleven time zones.

Russia has a 37,653 km long coastline. The latitudinal and longitudinal extent of Russia is 41° and 82°N and 19°E and 169°W respectively. It is bounded by the Barents Sea, Kara Sea, Laptev Sea and the East Siberian Sea in the north.

How to get to Russia

Depending on which country you are traveling from, Russia is reachable by air, boat, train, or bus.

How to get to Russia by air

Russia has 13 airports, the most popular, especially for international travelers, are the airports in Moscow and St. Petersburg.

The most popular airport in St. Petersburg is Pulkovo Airport (IATA code: LED).

How to get to Russia by train

There are many cities where you can get a train to Russia. You can get direct trains to from Riga, Tallinn, and Helsinki to St. Petersburg and Moscow. If you take a train from Warsaw or Vilnius, you will most likely have to cross Belarus.

The best and cheapest train journey from Europe to Russia is a train to Berlin or Warsaw first and then onward to Moscow or St. Petersburg. Of course, there are also trains from Helsinki, which takes only 5 hours to St. Petersburg (11 hours to Moscow) and cost much less.

How to get around in Russia

Trains (Aeroexpress): Russia has the largest urban metro system in the world. It’s easy to navigate and operate between 05:25 am and 01:00 am. Find the latest times and fare on the English website HERE.

Buy a Troika card and recharge it for use on the Aeroexpress, bus, and street car.

Taxi: Order a taxi on Yandex (Russia’s version of Uber): you can type in your destination and pay through the app (highly recommended) or pay in the exact amount in cash to avoid fake money scams. Read the ultimate guide to using taxis in Russia.

Russia has always been and still remains attractive for tourists. Every Russian city is filled with history. And each region is inimitable and unique. There is more to Russia than the well-known names of Moscow, St. Petersburg, Siberia, Baikal, the Urals, Kamchatka, and recently – Sochi.

When is it the best time to visit Russia?

Russia shares its land boundary with fourteen neighboring countries. China, Mongolia, North Korea, Kazakhstan in the south, Georgia, Azerbaijan in the southwest, Norway, Finland, Lithuania, Estonia and Latvia in the northwest and Poland, Belarus and Ukraine in the west.

Is Russia in Europe or Asia

Russia spans the northern part of the Eurasian continent, 77% of Russia’s area is in Asia, the western 23% of the country is located in Europe, European Russia occupies almost 40% of Europe’s total area.

Once the preeminent republic of the Union of Soviet Socialist Republics (U.S.S.R.; commonly known as the Soviet Union), Russia became an independent country after the dissolution of the Soviet Union in December 1991.

Russia is home to the deepest lake in the world

The age, isolation and deep oxygenated water of Lake Baikal have resulted in one of the world’s richest freshwater ecosystems. The lake is located in south-central Russia near the Mongolian border. The three main points of access to Baikal are Irkutsk and Ulan-Ude and Slyudyanka.

Russia is home to the world longest Railway

The Trans-Siberian Railroad was built between 1891 and 1916. It connects Moscow to far eastern Russia. This train journey is the longest you can make on a single train: the longest of the three trans-Siberian routes, between Moscow and Vladivostok, covers 9,258km (6,152 miles) and takes seven days.

The official language of Russia is Russian. This language uses the Cyrillic alphabet instead of Latin and is one of the five most spoken languages in the world. Everything is in Russian (Cyrillic writing) except for things that are tourist-related. English isn’t widely spoken so I would advise downloading a language app like Google Translate or learning some popular phrases:

Debit and Credit cards are not widely accepted so make sure you always have cash. ATMs are open 24/7 and easy to find in cosmopolitan cities like Moscow and St. Petersburg. Most have an English and Russian language option. 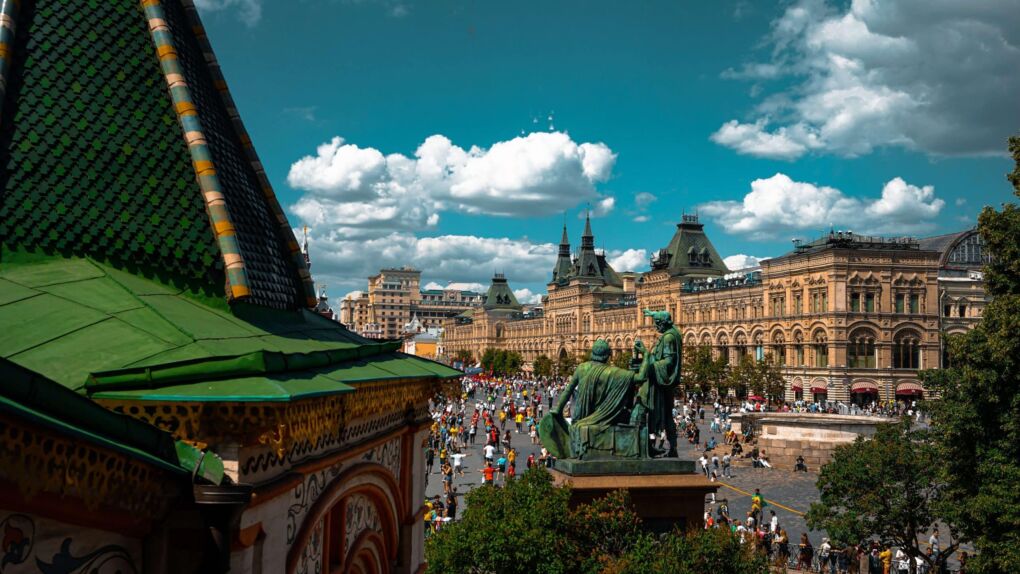 There are important laws to know before visiting Russia for the first time.

At the moment (May 2019) there are only 32 nationalities that have visa-free access to the Russian Federation. South Africa is one of them and we can stay for 30 days visa-free, without the intention of working, studying or living in the country. If you’re not South African, find out more about visa requirements for your country on the official Russian government website.

You should carry your original passport with you at all times as you can be asked for identification at any time by police who carry random checks. Don’t argue or ask why its simply the law in Russia. Failure to produce a passport can lead to a fine or arrest. A copy will not be sufficient.

If you are staying in Russia for more than 2 days you need to register with local authorities (at the police station). Usually, hotels do this for guests automatically, but if you’re renting a property from a private company like AirBnB it will be your responsibility to ensure this is done. Learn more.

I traveled with Aeroflot (The largest airline in the world during the Soviet era and today they are the official Russian Federation airline). On their website it states:

Aeroflot won’t accept passengers without a paper boarding card. If you don’t have time to print out your boarding pass at home, you can print it at one of the airport’s self-service kiosks. The exception to this is passengers who check in via mobile, as they will be sent a special 2D barcode which can be scanned by the gate agent. Traditional check-in, at the customer service desk, is also available (and is complimentary). Check in usually closes 40 minutes before departure. Learn more.

The photographing of any military installation, establishment, or site of strategic importance (including airports) is banned. You are likely to have your film confiscated, be detained for questioning, and possibly arrested if you do not obey this rule.

The general rule is that alcohol in Russia is not sold in shops between 11 pm and 8 am, but you can buy in advance and drink from home or visit a bar or restaurant to enjoy a drink there.

Things to do in Russia

I highly recommend planning your itinerary and buying your tickets before you visit Russia. There is a lot to do, so you should research in advance, and immigration might also ask for a copy of your itinerary, so it’s important to be prepared.

Are you visiting Russia soon? Read this…

Use travel insurance while visiting Russia so you are covered for theft and medical expenses. There are a lot of adventurous activities to do in Russia, and it’s best to have peace of mind while driving, hiking and trying some of the best food in the world.