Like the amazing landmarks in South Africa, these symbols represent the stories of the past and current South Africa. Each symbol was chosen by purpose and most are unique to the country.

Our national symbols include a flower, a bird, a fish, a tree, and an animal. These symbols are special and easily recognized by most South Africans.

Our flag is another amazing national, with six colors, the design and colors are a synopsis of principal elements of the country’s flag history.

What are the 5 South African National Symbols?

Here are the national symbols: 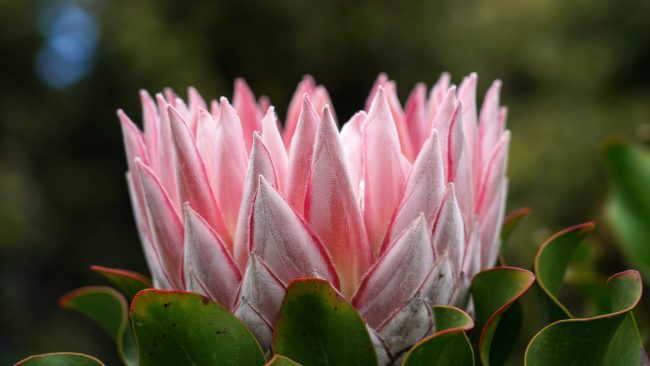 The King Protea is one of the 5 South African National symbols. The flower grows in areas with dry, hot summers and cold winters, on the well-drained, poor soil, exposed to direct sunlight The King Protea is widely distributed in the southwestern and southern parts of the fynbos region.

The flower develops 6 to 10 bowl-shaped flower heads that consist of numerous small, tubular-shaped flowers. They can be pink or crimson-colored and surrounded by large, stiff, pointed bracts (modified petals-like leaves). Flowers contain both types of reproductive organs (perfect flowers).

The inner part of the flower head is filled with numerous white stamens oriented toward the center. The flower head can reach 12 inches in diameter and it looks like large artichoke and it also develops few thick stems that can reach 3 feet in height.

Although King Protea originates from South Africa, it also grows in Australia, New Zealand, and South America. The King Proteas was declared the national flower of South Africa in 1976, presiding over the previous “suikerbossie” flower (Sugar-bush).

Real Yellowwood Trees (Podocarpus latifolius) are one of the 5 national symbols and a natural tressure! Standing at an average of 3m and reaching up to 2000 years.

These mountain regions, both the South and the Eastern regions of the state, the Western Cape, the East, and the North regions namely KwaZulu and Limpopo terrains.

The famous Big Tree in Tsitsikamma – along the N2 highway in the forests of the Garden Route, is also a Yellowwood.

The Springboks one of the fastest animals on the planet. It can reach a speed of 60 miles per hour. It’s no surprise why its one of the 5 South African national symbols and the South African Rugby team is named after this animal.

The name Springbok comes from the Afrikaans words “spring” referring to jump and “bok” referring to “goat”. Springbok can jump 6.5 to 9 feet from the ground. Series of consecutive leaps, known as “pronking”, provides information about animal surroundings, sends olfactory messages (from the glands near the heel), and shows the strength of animals.

There are 3 subspecies of springbok that can be found in southern and southwestern parts of Africa. Springboks are herbivores(plant-eater). Their diet is based on grass, leaves, flowers, roots, and tubers. They can live for up to 10 years in the wild.

The Galjoen is a Black Bream or blackfish found along the coast of Southern Africa from Angola to South Africa. The word “Galjoen” is Dutch for “Galleon” a type of large sailboat that was designed to be a cargo ship, with lots of cannons for protection. These were the kind of boats the dutch built when you arrived in the Cape Colony.

The mid-sized fish has oval-shaped and flattened bodies with symmetrical dorsal. They grow to about 7kg and over half a meter in length and mainly eat ascidians (sea squirts like redbait), small crustaceans, barnacles, and red seaweed.

Known as the Grus Paradise, the Blue Crane is one of the 5 national symbols of South Africa. The Blue Crane is known for its bravery and hunting prowess. In the Zulu culture, it’s known as “Udoyi” and chiefs wore the Blue Crane’s feathers in their headdresses.

Standing about a meter tall, the bird is a light blue-grey, with a long neck supporting a rather bulbous head, long legs, and elegant wing plumes which sweep to the ground.

There are about 25 000 Blue Cranes left in the world, about half of which can be found in the Cape Overberg. bout 90 kilometers south-east of Cape Town.

Designed by Mr. Iaan Bekker, the Coat of Arms is one of the national symbols of South Africa, it was introduced on the 27th of April 2000 (Freedom Day) to highlight the democratic change in South Africa and a new sense of patriotism.

The motto is written on the Khoisan language of the ǀXam people and translates literally to “diverse people unite”. It addresses each individual effort to harness the unity between thought and action. On a collective scale, it calls for the nation to unite in a common sense of belonging and national pride – unity in diversity.

The ears of wheat represent the emblem of fertility, it also symbolizes the idea of germination, growth, and the feasible development of any potential. It relates to the nourishment of the people and signifies the agricultural aspects of the Earth.

The shield has a dual function as a vehicle for the display of identity and of spiritual defense. It contains the primary symbol of our nation.

The human figures are depicted in an attitude of greeting, symbolizing unity. This also represents the beginning of the individual’s transformation into the greater sense of belonging to the nation and by extension, collective humanity.

The King Protea symbolizes the holistic integration of forces that grow from the Earth and are nurtured from above. The most popular colors of Africa have been assigned to the protea – green, gold, red, and black.

The secretary bird is characterized in flight, the natural consequence of growth and speed. It is the equivalent of the lion on Earth. A powerful bird whose legs – depicted as the spear and knobkierie – serve it well in its hunt for snakes, symbolizing protection of the nation against its enemies. It is a messenger of the heavens and conducts its grace upon the Earth. In this sense, it is a symbol of divine majesty. Its uplifted wings are an emblem of the ascendance of our nation, while simultaneously offering us its protection. It is depicted in gold, which clearly symbolizes its association with the sun and the highest power.

The rising sun is an emblem of brightness, splendor, and the supreme principle of the nature of energy. It symbolizes the promise of rebirth, the active faculties of reflection, knowledge, good judgment, and willpower. It is the symbol of the source of life, of light, and the ultimate wholeness of humanity.

Use travel insurance while visiting South Africa so you are covered for theft and medical expenses. There are a lot of adventurous activities to do in SA, and it’s best to have peace of mind while diving, hiking and trying some of the best food in the world.