If you’re planning a trip to Cape Town in December, you’ll find that this is one of the most fun and exciting months to visit the mother city! December is summer in South Africa and you’ll find a variety of special events, from concerts to holiday markets offering seasonal treats, yacht parties, and or simply the incredible lighting displays.

Where is Cape Town

Cape Town is the second-most populous city and the legislative capital of South Africa. It’s located in the south-western corner of the country at the foot of Table Mountain in the Westen Cape Province.

Like in most cities around the world, winter is low season in Cape Town (and most destinations), meaning you’ll have more of the city to yourself and won’t have to compete with hordes of tourists for entry to exhibits, monuments or when making restaurant reservations. Not to mention the fact that accommodation and flights are cheaper than in peak season.

Weather in Cape Town in December

If you plan on spending December in Cape Town, be sure to pack light. December is summer in South Africa, despite other parts. of the country experiencing heavy rains, it tends to. be sunny and dry 85% of the time in Cape Town. December also has the longest days, with temperatures hover at around 25 – 27°C, and there are 11 sunshine hours during the day.

The temperature in Cape Town in Summer

Summer in Cape Town is usually warm, dry, and it is windy year-round. Over the course of the year, the temperature typically varies from 48°F to 76°F and is rarely below 41°F or above 84°F.

The temperature in Cape Town in Winter

In Winter (June – August) the average temperature is 64 F/18° C (high) and 46 F/7°C (low). It also rains a lot and for a city where outdoor activities are the main attractions, most people are discouraged to visit. In Cape Town, most things weather-dependent but I didn’t let this affect my decision to visit the city.

Things to do in Cape Town in December

With so many fun things to do in Cape Town, its no surprise that it often referred to as the trending city in South Africa, and that’s with good reason.

Cape Town seems to have an inexhaustible offer of all things cool, innovative, and extraordinary – be it urban pools, open-air festivals, or rooftop bars. Not taking into account the usual touristy sights, Cape Town is a popular tourist destination for any season in, especially December in South Africa.

Get lost in the city

I find the best way to explore a city is; purchasing a bus pass, hoping a random bus, getting off a random stop, and finding your way back. This can be done with the City Sightseeing Bus in Cape Town.

There are 2 ticket options available. If you opt for a 1-day ticket it allows you to experience all four routes – Red, Yellow, Blue, and Purple Routes.

Head to Boulders also known as Penguin Beach in Cape Town, a sandy stretch of shoreline on the Cape Peninsula with rocky outcrops and wild waves.

Particularly as it’s home to a load of African penguins. I wouldn’t recommend swimming but makes for a wonderful coastal walk.

Go for lunch in Muizenberg 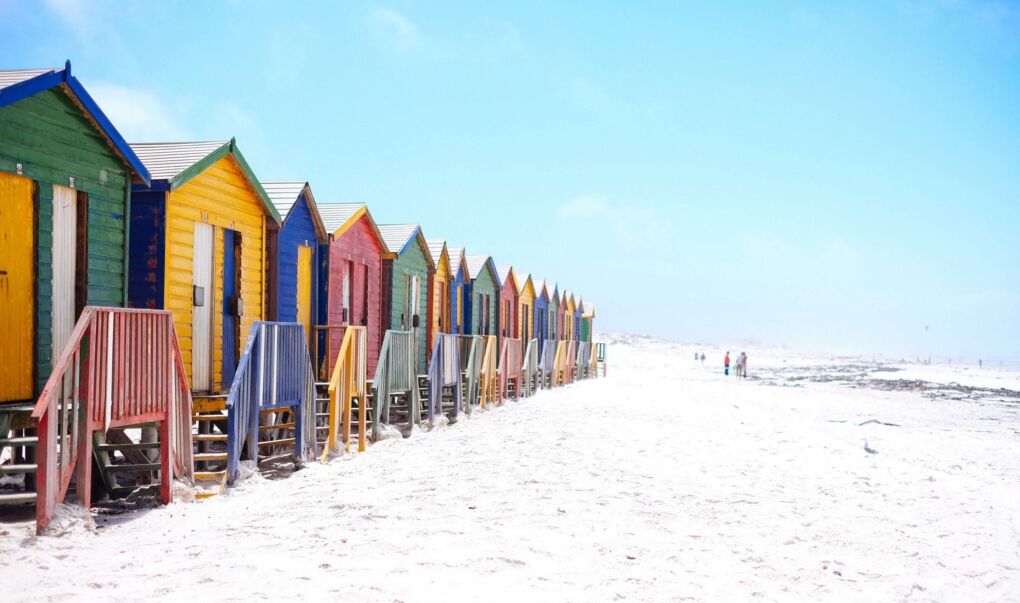 Home to the Instagram famous colorful beach houses. Spend the day in Muizenberg, it’s a popular surfing destination with cute cafes and boutiques to visit.

A visit to Kirstenbosch Botanical Gardens is a must! Set against the backdrop of Table Mountain National Park, you’ll find a garden that not only showcases the unique and incredibly diverse flora of the Cape but also offers incredible views.

The garden was founded in 1913 on an estate that covers 528 hectares and supports a diverse fynbos flora and natural forest. Kirstenbosch National Botanical Garden is the ultimate place to go for a picnic and live music.

The Summer Sunset Concerts are open-air music shows featuring top local musos and a handful of international artists. Hosted annually every Sunday between November and April. The events are a summer staple in Cape Town and make for some of the best evenings you can possibly have in Cape Town in December.

Helicopter Tour of the Mother City 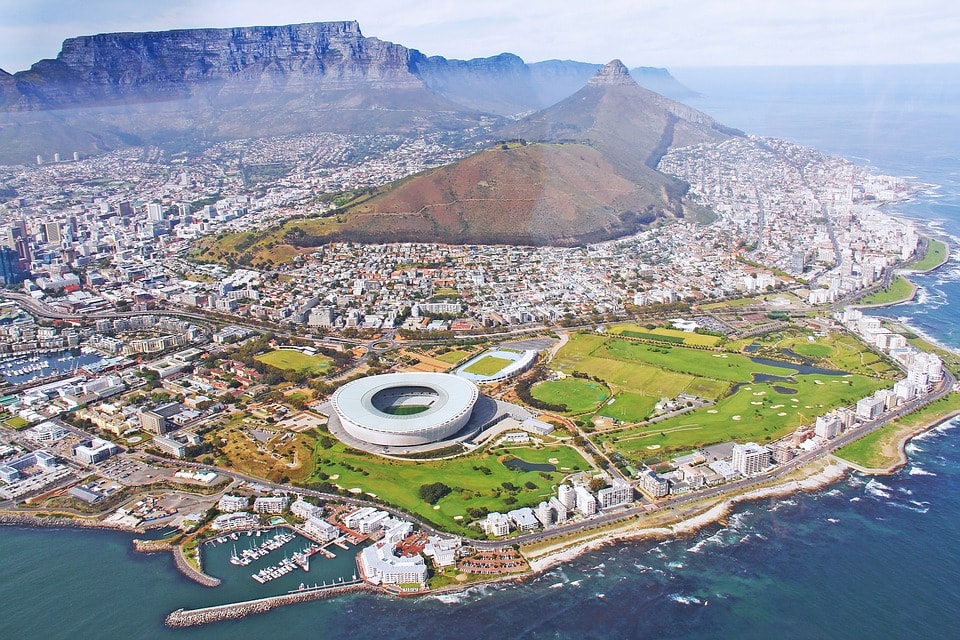 A helicopter ride is a wonderful way to see the majestic Cape Town – Perfect for dates, family adventures, special occasions, and even proposals, there’s always an excuse to jump on a scenic flight.

There are different tour options, we went on the hopper tour which takes off from the iconic V&A Waterfront, passes through City Bowl, Green Point, Sea Point, Clifton, Camps Bay, The Twelve Apostles, and back.

Like Signal Hill, the walk to the top of Lions Head is popular with both tourists and locals alike. Signal Hill Trail is a round loop. Two different routes to reach the top of Lion’s Head mountain are available.

Lion’s Head routes to choose from including the Chains and the Spiral Route Generally, the walk takes about 90 minutes and is fairly manageable although there are a few chains and ladders that one might need to negotiate along the way, especially as one nears the steeper sections of the climb. 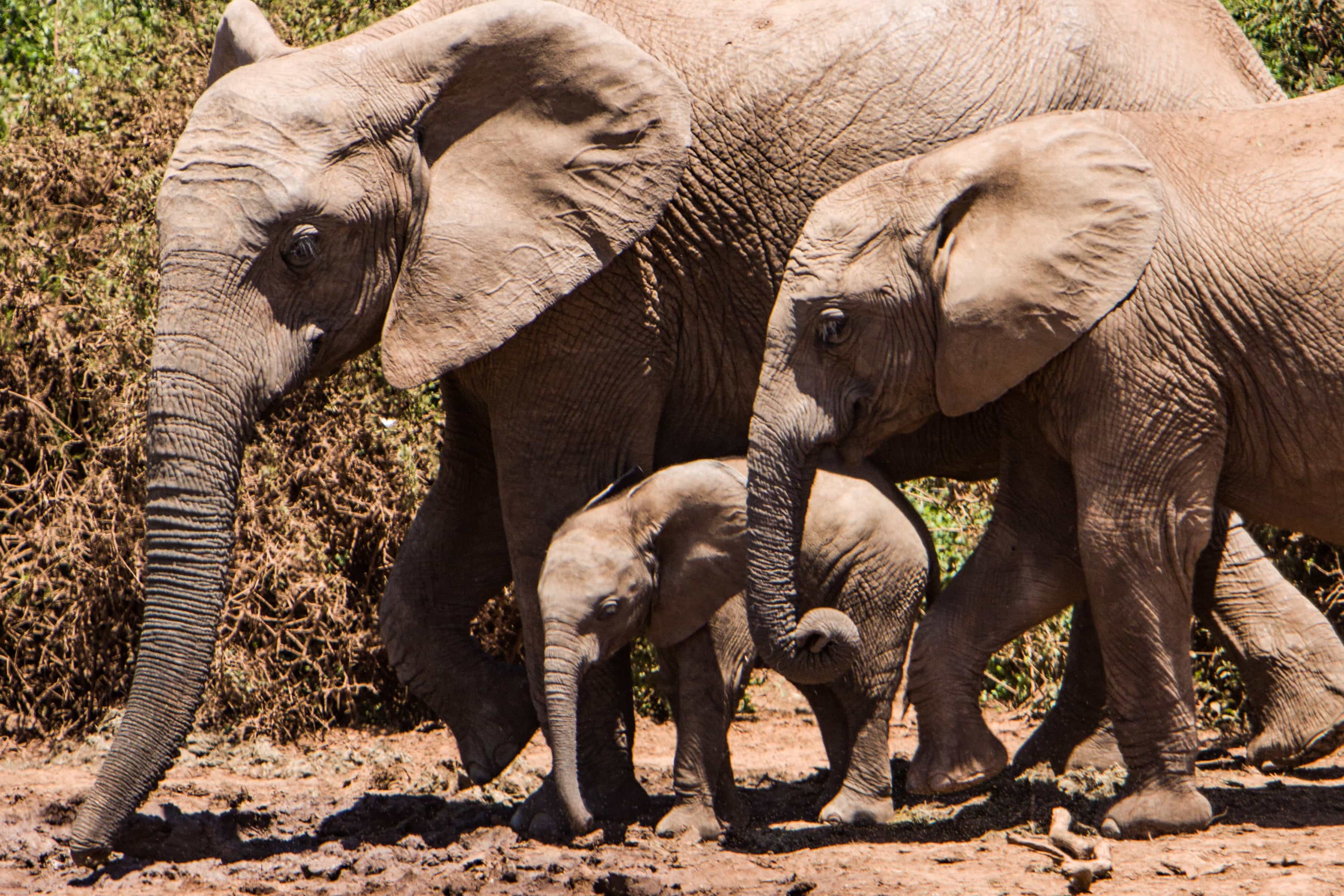 Go on a day trip to a private game reserve! Experience an open vehicle game drive with the opportunity to view giraffes, lions, leopards, zebras, rhinos, wildebeests & many other wildlife types. Enjoy lunch at the lodge! 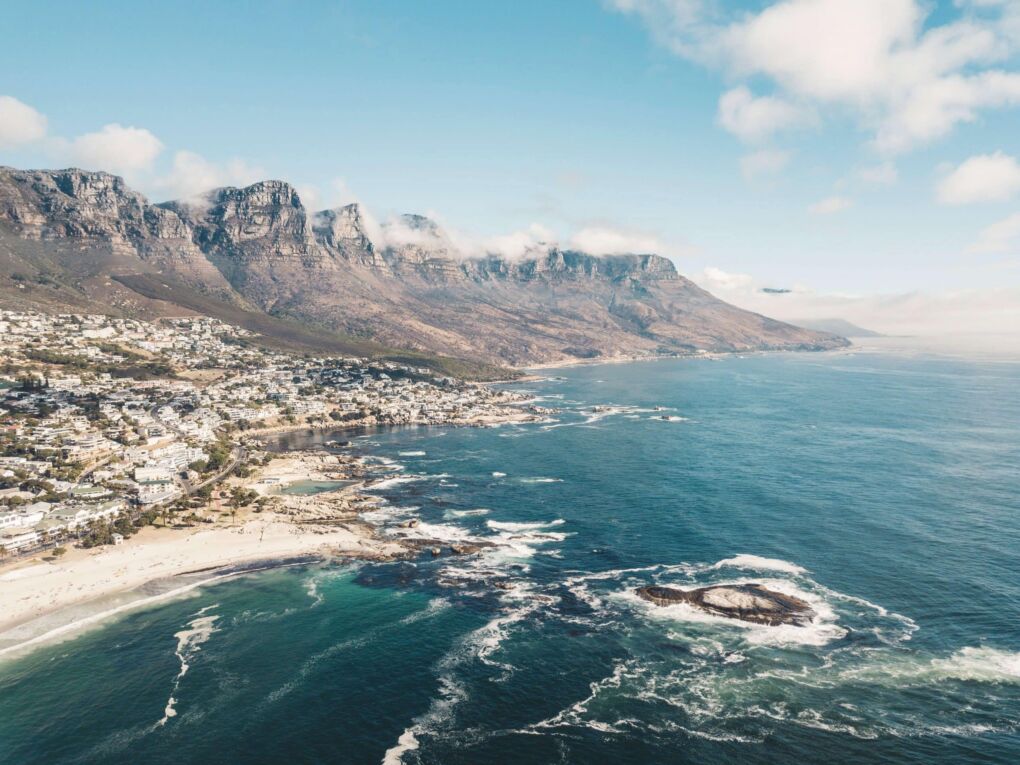 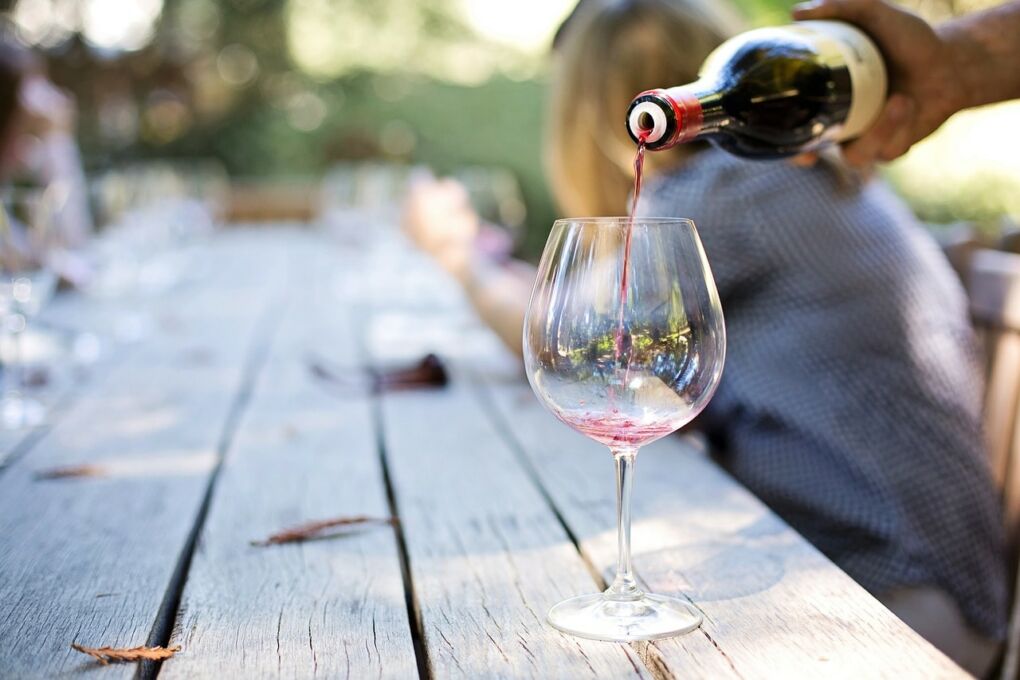 There’s nothing like a bottle of fine wine! The Cape region is one of the most beautiful wine regions, in fact, South Africa produces 7% of the world’s wine.

Learn how to cook a typical Malay dish in the iconic Bo-Kaap. Discover the culture and rich culinary traditions of Malay from a friendly local.

Savor the delicious feast you prepared. Situated at the foot of Signal Hill, on the fringe of the city center, and formerly known as the Malay Quarter, the Bo-Kaap’s origins date back to the 1760s.

Dive with sharks in Cape Town

Fancy a meeting the most feared animal on Earth? See majestic great white sharks up close during a cage dive or watch from a boat as these powerful creatures launch themselves into the air while on the hunt for food (seals in most cases). With over 500 species there is no exact figure of sharks in our oceans.

The Great White Shark is the most common and oldest species of sharks and can be found in the water surrounding South Africa and Australia. The earliest ancestors of great white sharks were around 400 million years ago.

Tours are available year-round but it’s important to remember that they are weather dependent. In the event of a weather cancellation, most operators offer vouchers to reschedule the tour for another day.

Depending on the tour operator, Shark cage diving and viewing costs range between R2000 to R3000 for adults and R1500 for children under 12.

If you purchase a Cape Town City Pass, you get free entry to over 70 Cape Town attractions, including Great White Shark Tours.

Where to go Shark Cage Diving In Western Cape

Are Sharks Vanishing in Cape Town?

The Shark Spotting Programme was established to warn swimmers when the three-ton predators approached beaches, reported an average of 205 sightings of the fish off the beaches of False Bay. In 2018 that fell to 50 and this year (2019), not one has been seen. None have been seen at Seal Island, a one-time feeding ground off the coast.

The shark cage diving eco-tourism operators, who would normally witness multiple individual sharks visiting their vessels and up to 30 seal predations daily, have not had a single white shark sighting at Seal Island in 2019.

Despite the disappearance of great white sharks from False Bay in Cape Town. You can still go shark spotting at very popular Cape Town beaches of: 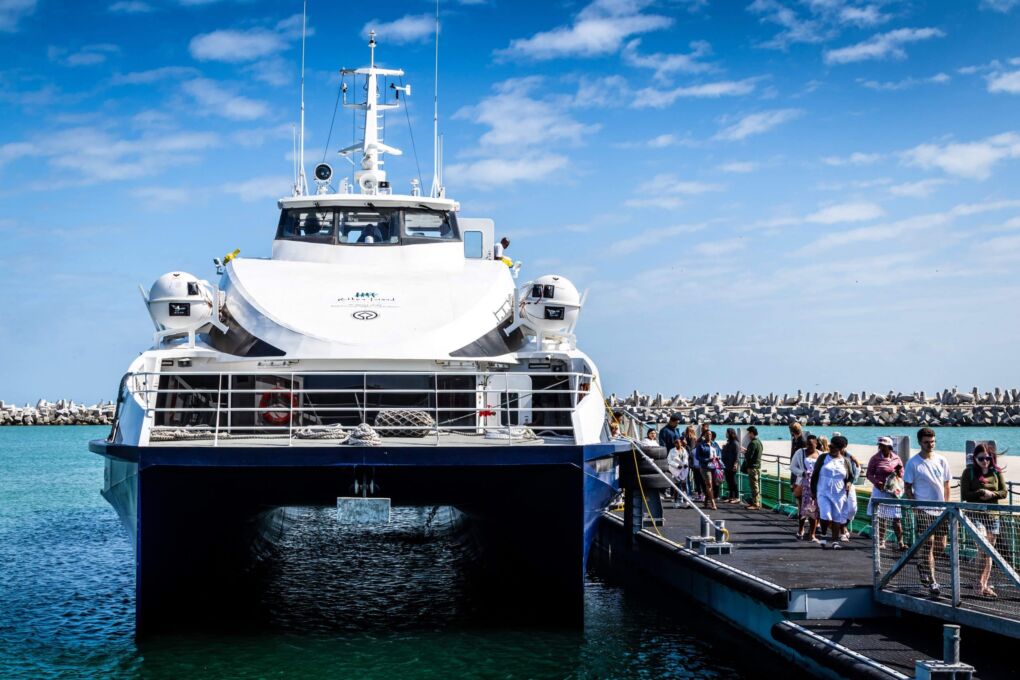 Made famous by it’s a most illustrious inhabitant, Nelson Mandela. Declared a UNESCO World Heritage site on the 1st of December, 1997. Robben Island is 11KM’s from Table Bay Harbour and has more than 100 bird and animal species. Over the years, the island has housed a hospital, mental institution, leper colony and a military base in World War II.

Today Robben Island is home to an estimated 200 people. The Island also has a school, church (weddings are also held here), supermarket and there are plans for building guest houses and conference facilities in the next five years.

Shop for gifts and souvenirs at these amazing markets in Cape Town:

Take a drive to Rylands also known as the “Little India of Kaapstad”. I spent an hour walking around until I spotted a salon and walked in for a mendhi (R50) and eyebrow threading (R35) experience. Mehndi (also known as Henna in Urdu) is an important part of Hindu tradition.

A ceremony is held the evening before a wedding where the application of the mehndi on a bride’s hand (starting from the elbows) and feet (starting from below the knees).

After a few hours, the mend starts to peel off and you are left with a deep brown color pattern dye on your body. I would only recommend visiting the townships with a local or tour company like this one!

Use travel insurance while visiting South Africa so you are covered for theft and medical expenses. There are a lot of things to do in SA, and it’s best to have peace of mind while driving, hiking, and trying some of the best food in the world.